Amazon organizes Amazon Quiz daily from 8AM – 12PM and offers huge prizes everyday. By just answering 5 simple question, you can stand a chance to win that prize. In today’s Amazon Quiz, you can win a Sony noise cancelling headphone whose actual price is Rs 29,990. Its battery lasts up to 30 hrs. It also has Touch Sensors to play and skip tracks and you can control volume by a simple tap or swipe on the ear cups. So, don’t miss out. Answer now. 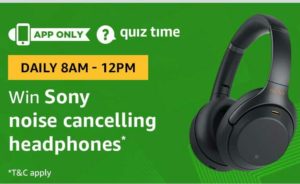 How to Answer and win a Sony noise cancelling headphone?

1. First of all, download Amazon App here (if you don’t already have the App).

3. On the dashboard, you’ll see a banner related to Quiz.

5. Answer all the questions correctly (Answers given below) and you’ll get a congratulation message stating that you are in the luck draw now.

6. If you win the prize, you’ll be informed via Email. List of winners will also be published on the Amazon.

Q2. Vlad the Impaler was an emperor in Romania in the 14th century. Which fictional character was based on him?
Ans – Dracula

Q3. The ‘Asteroid Belt’ is a region of space where most of the asteroids in our Solar System are found orbiting the Sun. This Belt is located between the orbits of which two planets?
Ans – Mars and Jupiter

Q4. Narthaki Nataraj recently became the first Transgender to be awarded the Padma Shri award. Which of these dance forms is she associated with?
Ans – Bharatnatyam