Amazon organizes Amazon Quiz daily from 8AM – 12PM and offers huge prizes everyday. By just answering 5 simple question, you can stand a chance to win that prize. In today’s Amazon Quiz, you can win an Honor Band 4 which nearly costs Rs 2999 on Amazon. So, don’t miss out on this free chance. 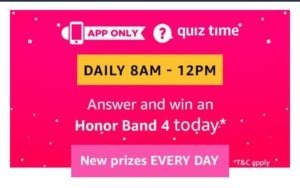 How to Answer and win an Honor Band 4?

1. First of all, download Amazon App here (if you don’t already have the App).

3. On the dashboard, you’ll see a banner related to Quiz.

5. Answer all the questions correctly (Answers given below) and you’ll get a congratulation message stating that you are in the luck draw now.

6. If you win the prize, you’ll be informed via Email. List of winners will also be published on the Amazon.

Q1. Wolverine, also known as ‘Gulo Gulo’ is the member of which animal family?
Ans – Weasel

Q4. Which ancient empire was ruled by Xerxes the Great in the fifth century BC?
Ans – The Persian Empire

Q5. Which nation was the first to give women the right of vote?
Ans – New Zealand